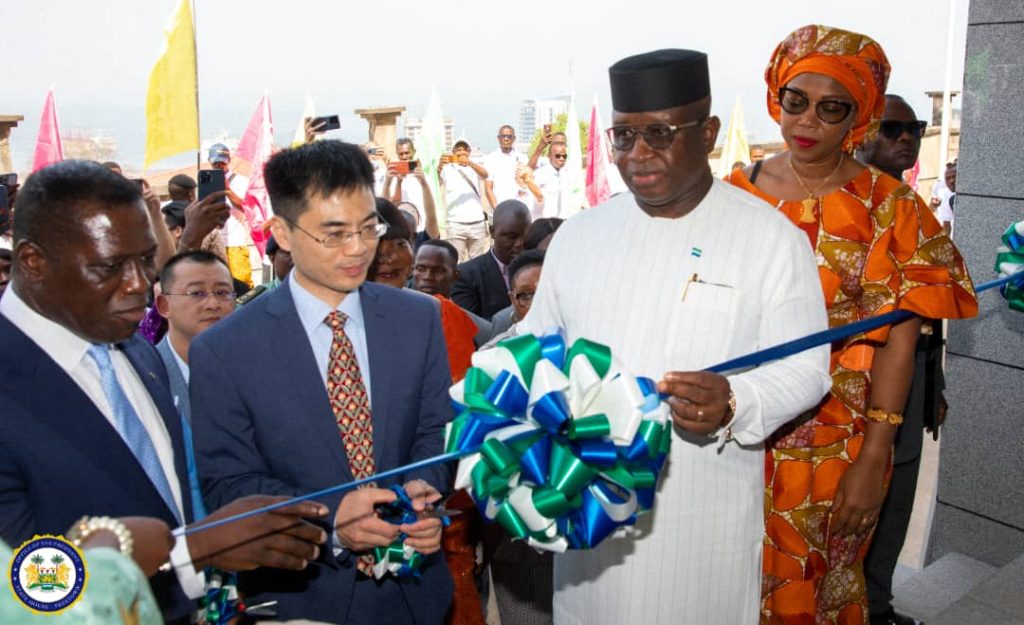 His Excellency President Dr Julius Maada Bio has officially commissioned the Sierra Leone Foreign Service Academy, saying it is another testament to the mutual cooperation, shared vision and ever-deepening relations with the Government of the People’s Republic of China.

He also conveyed his sincere gratitude to the Chinese President, Xi Jinping, for his government’s generosity and commitment to supporting his country’s sustainable development and socioeconomic transformation.

“With President Xi Jinping’s and his government’s support, we have registered significant progress in each of those sectors,” President Bio acknowledged.

The President further informed that over the past four and a half years his government’s main foreign policy focus involved strengthening external relations for integration, adding that his New Direction Agenda promoted international cooperation built on mutual respect, mutual trust, and mutual benefit with strategic partners.

“We have strategically rebranded our great nation and repositioned it with pride in the community of nations through proactive, constructive, and productive engagements with the world. A necessary policy action to strengthen international cooperation outlined in my government’s Medium-Term National Development Plan was establishing a Foreign Service Academy to train and produce career diplomats for global engagement,” he recalled.

President Bio noted that the Foreign Service Academy would enable the nation to solidify its efforts in promoting the country’s foreign policy and strengthening cooperation with regional and international partners.

“We will focus on upskilling and reskilling the existing foreign service workforce through the Foreign Service Academy. Also, the Academy will recruit and train a dedicated cadre of professional career diplomats that will be globally competitive in our ever-changing world,” he said.

He thanked President Bio for accepting his letter of credence, expressing how happy he was to see that the relentless efforts of the two countries had led to the construction and handing over of the building as a Christmas and New Year gift from the People’s Republic of China to Sierra Leone.

“Capacity building is essential to building our nations. I hope and believe that this academy will become Sierra Leone’s cradle of diplomats, with more career diplomats in this country and in Africa. I want to express my sincere appreciation to the Sierra Leone government for your trust and cooperation in this project.

“Since the establishment of diplomatic relations 52 years ago, China and Sierra Leone have always been good friends, good brothers, and good partners We treat each other as equals and cooperate for mutual benefits and common development,” he said.

The Chinese Ambassador reassured that while Sierra Leone was making progress under the New Direction agenda, the Chinese New Journey would present more opportunities for their bilateral cooperation.

“Under the strategic guidance of His Excellency President Xi Jinping and Your Excellency, Julius Maada Bio, we are sure that China-Sierra Leone relations will have a more shining and promising future,” he ended.