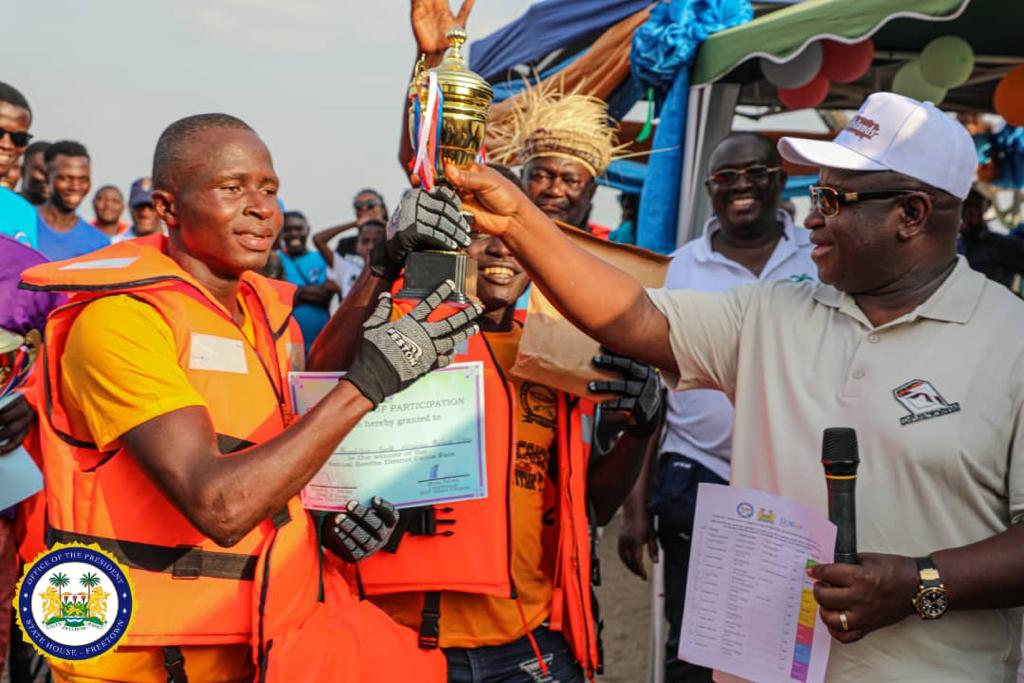 His Excellency President Dr Julius Maada Bio is spending this year’s Christmas break on Sherbro Island where he has revived the canoe race, which started in 1959 and stopped in 1964, a long-forgotten tradition of the historic Sherbro people of Bonthe District.

The President announced that he was starting the race all over again with seven sets of competitors participating in the 2022 game, with each of the five coming from other chiefdoms and two from the Bonthe Municipality.

“The rejuvenation of this competition was part of my government’s ambition to regain the lost glory of this municipality. We are Sherbros. This is our culture. As Sherbros, our identities are boats and fishing. Fishing is what we do to earn our livelihood while boat racing is a way of boosting our economy and tourism,” he recalled.

When presenting the trophies and cash prices to each set of participants, President Bio said the last time they held a canoe competition on the Bonthe Sherbro Island was nearly 60 years ago.

While prize money was presented to each of the competitors, trophies were also given to the winners from Nongoba Bullom Chiefdom and those in second and third places.

Deputy Minister of Tourism and Cultural Affairs, William I. Kongkatee Robinson, said the canoe race was initiated by Sir Maurice Henry Dorman, the then British Governor of the colony of Freetown and Bonthe Municipality in 1959.

“The Governor used to host this competition every 26th day of December. He would travel from Freetown through the sea to Bonthe, Sherbro Island. During the active years of this competition, spectators from all the chiefdoms in Bonthe District and outside the district used to assemble in the municipality to witness it,” he recalled.

He said the competition used to boost the economy and tourism of the Island, adding that the winners would always take the trophies and cash prizes to the communities where they hailed from.

“We are happy to see that all the activities that were no longer taking place in Bonthe Sherbro Island have been revived. This is what everybody from this municipality wants to see. Activities such as these will bring optimism back to our people and boost tourism. We hope that it will never stop again,” he urged.