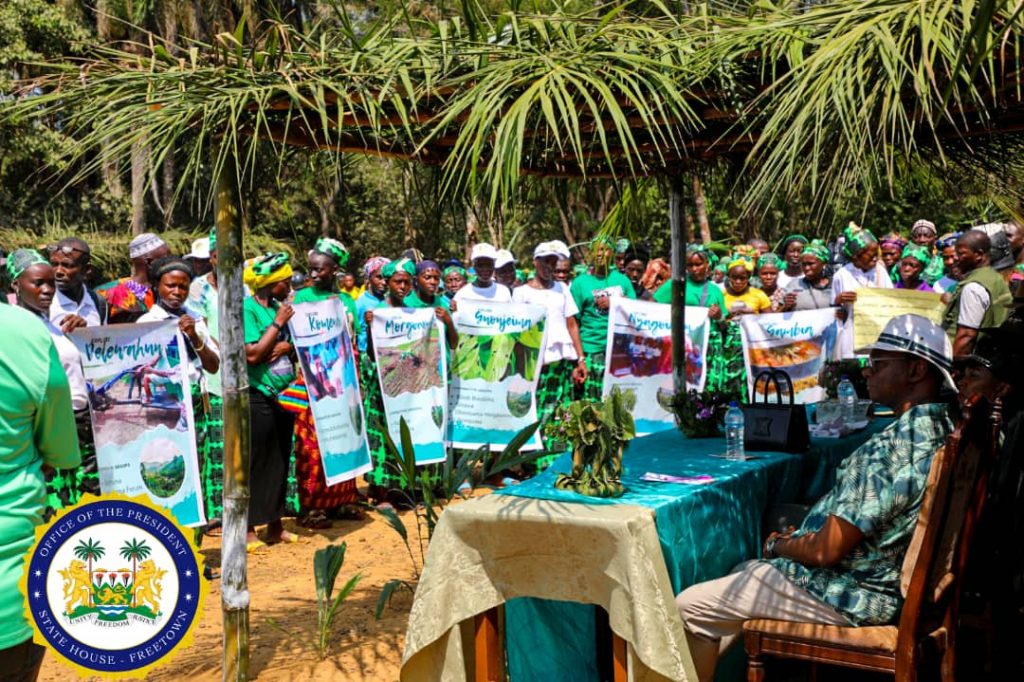 The President, who is on a four-day tour of most of the headquarter towns of the 14 chiefdoms in the district, said he was particularly impressed and happy to see that there was an increased passion from people to go into agriculture.

“My government chose human capital development with three sectors, including education, agriculture, and health, for the people of Sierra Leone. Our country has taken off on the trajectory of development, which I have seen coming for a long time.

“Things are tough and difficult globally, but my government has continued to boost its human capital development agenda. As a nation, we have no business importing rice. My second term as President will focus on agriculture. It is a critical issue because there is money in the bush. All we need as a nation is to structure ourselves with good and accountable leaders,” he revealed.

President Bio, who had promised to change the negative reputation of Sierra Leone, disclosed that he was proud that the country was being recognised globally for all the good reasons, including progress on education indicators and improvement in the fight against corruption. He added that as a result, the United States Government through its Millennium Challenge Corporation was ready to support his government with more than $350 million as a result of his progressive leadership style.

“No country has survived without education. No country has striven without a solid educational foundation. So, I am calling on all Sierra Leoneans to choose education in the interest of national development,” he appealed.

Henrietta Matthews, chairwoman of the Unity Farmers Association, said for the past three years her organisation had embarked on the cultivation of onions, vegetables, and groundnuts in Nguala village. She said they had over 30 members, including 20 women, who had received one milling machine from the government to assist them with ploughing.

“Previously, we had to spend more time ploughing a small plot of land, which took time, energy during every planting season. But with the support from the government, we are assured of cultivating more farmland in time, which will also increase yield,” she explained.

“I can plough and arrow seeds on any hectare of land. Because I am a woman operating a tractor, I am now admired by men and my colleagues, and I am no longer a liability to my family. My parents are happy for me too,” she informed.

The Chairlady of Wan Word Farmers Association said they were happy as an organisation of women farmers to be beneficiaries of the government’s machinery, pointing out that they were also a major client in the sector who had never been considered for any opportunities.

“We are happy today that President Julius Maada Bio has positioned women at the top, from owning farmland to political participation. Because of the opportunities for women in the agricultural sector created by President Bio, we are calling on our colleague women to come out in their numbers to grab these available opportunities. Most of the farm work is done by women, and if this government has opened up the space, women should use that opportunity,” she urged.