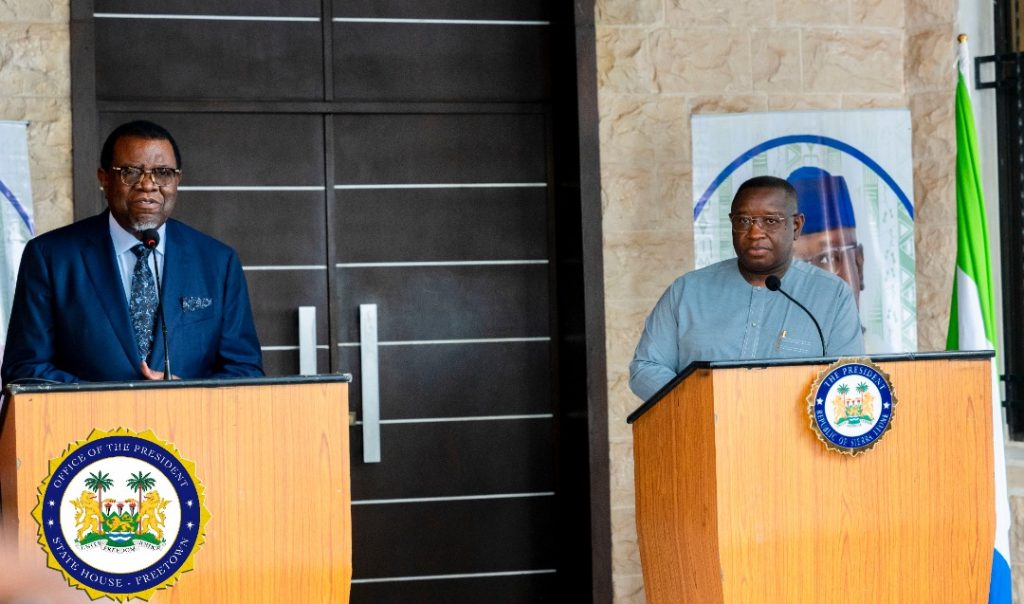 The country’s biggest campaign to protect girls, the flagship programme of the office of the First Ladyship, was launched in December 2018, specifically to bring awareness, influence policy and support women and girls to have access to reproductive healthcare and treatment for conditions like Fistula and Cancer, and to eliminate such abuses like early childhood marriage, gender-based violence and rape.

At a joint press conference, immediately after bilateral talks, the two leaders came out to express their satisfaction with the level and engagement they had had and told the media that they were committed to promoting each other’s interests and building on what had been achieved.

Like First Lady Fatima Bio, Madam Monica Gengios, who is the current President of the African First Ladies, is deeply committed to empowering women and girls in her country and the continent. The two also seek to create safe spaces for women and girls at home and abroad.

The Namibian First lady also applauded Madam Fatima Bio’s efforts which were being celebrated all over the world, citing her recent feat at the 77th Session of the United Nations General Assembly, UNGA, where she successfully co-pioneered a resolution for an International Day in honour of survivors of sexual exploitation and violence.

Later First Lady Fatima Bio and First Lady Monica Gengios held discussions about the work they had done and committed to doing for women and girls. They also jointly visited the 34 Military Hospital to meet with several women and girls, and made some room for sightseeing.

It could be recalled that the General Assembly on 7 November 2022 adopted the groundbreaking resolution co-pioneered by First Lady Fatima Bio to declare November 18 the “World Day for the Prevention of, and Healing from Child Sexual Exploitation, Abuse and Violence”.

The First Lady, whose many years of work on protecting girls and vulnerable adolescents through her ‘Hands off our Girls’ flagship campaign, had also reminded UNGA that children, especially girls had continued to endure greater risk of the scourge of forced sex and sexual exploitation with all the related crimes ranging from abuse, violence to chronic and life-threatening diseases. She was recently a special guest of Lady Camila, the Queen Consort in the UK.

Meanwhile, His Excellencies talked about the special historical and friendly ties between Namibia and Sierra Leone, citing the days of Namibia’s colonial struggle particularly from 1966 to 1990 and the guerrilla movement led by the South-West Africa People’s Organization, SWAPO. Sierra Leone was home to many Namibian freedom fighters in the SWAPO leadership, and others who escaped the scourge of colonialism, and later settled in the country and had families.

They also recalled that many Namibians pursued secondary and tertiary education in Sierra Leone, including Namibia’s current Prime Minister, Saara Kuugongelwa-Amadhila, who attended the Koidu Secondary School for Girls (Kono) and the St. Joseph’s Secondary School in Freetown, and many others in past and current leadership positions in Namibia.

President Hage Gengiob was pleased to note that amongst many Namibians, he also was carrying a Sierra Leonean passport, which had saved him from deportation abroad at some point.

Namibia and Sierra Leone are members of the Committee of Ten African Heads of State seeking reform of the United Nations and coordinating Africa’s bid for a seat in the non-permanent category of the UN Security Council. President Bio is the current Coordinator of C-10.

His Excellency Hage Gottfried Geingob of Namibia and First Lady Monica Geingos will Sunday end their 3-day visit which started on Friday 9 December 2022.