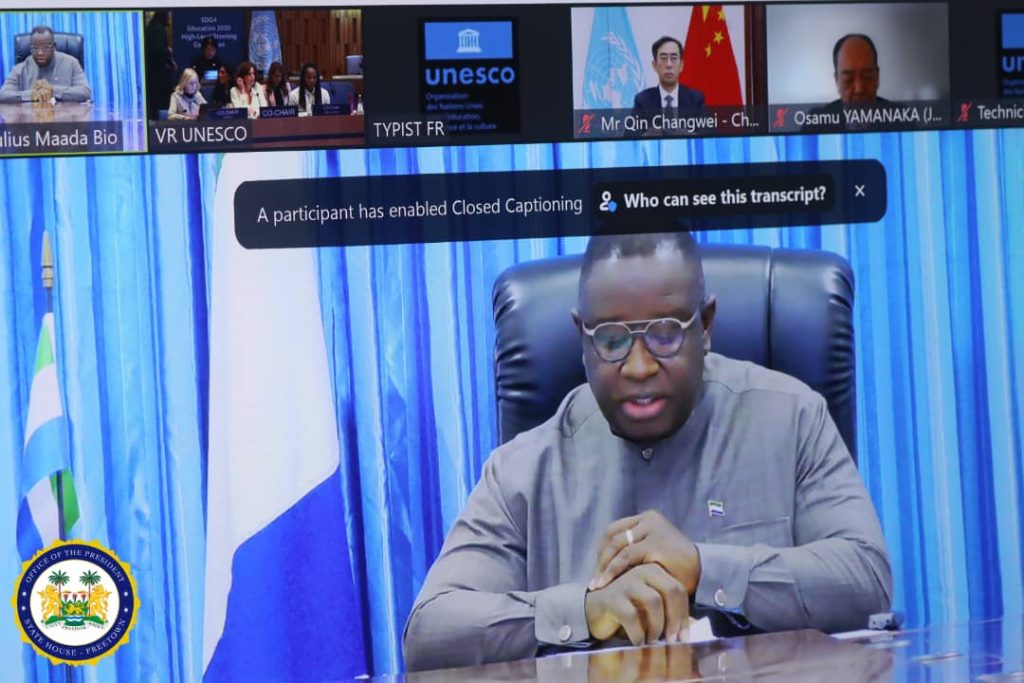 The hybrid meeting looked into many issues, including the adoption of the committee’s decision on education funding and urged member states to set an education policy as a benchmark with data, in line with the Paris Agreement.

In his opening remarks, President Bio thanked the Director-General of UNESCO, Audrey Azoulay, and her committee members for convening the meeting and acknowledged that indeed the Transforming Education Summit had ignited a veritable global movement for education.

“The commitments to education made by 65 heads of state and government have been unprecedented. To ensure that the summit is not a fleeting star but a real turning point for transforming education, collective efforts must focus on ensuring that the commitments made are acted upon,” the President urged.

President Bio emphasised that achieving progress at the country level must be at the heart of the summit’s follow-up, saying, “To succeed, the commitment and engagement of all actors will be critical. The strengthened Global Education Cooperation Mechanism provides a powerful framework to draw on comparative advantages, join forces for more effective coordination, and provide better support to countries”.

The President called on all steering committee members to respond to the call for bolder leadership in line with their mandate, with a responsibility to lead by example and champion the summit’s follow-up in particular by driving progress at the country level.

He reminded his colleague leaders that their collective success would depend on the contributions of each and every one of them.

“In that regard, I reiterate my commitment as the Global Champion for Education Transformation to advocate for an effective follow-up to the summit and rally support for education as a critical investment for our youth and for building a peaceful, just, and sustainable future for all societies,” he noted.

President Julius Maada Bio said while concluding, “The decision we have adopted today constitutes an important achievement and highlights our collective commitment to affirm the HLSC’s leadership role to deliver on the critical mandate entrusted to us for the Transforming Education Summit follow-up and beyond”.

“Our decisions outline clear actions, tasks, and responsibilities, with a strengthened monitoring component that will allow for greater accountability. As we conclude, I wish to reiterate, once more, that the legitimacy and strength of the High-Level Steering Committee are rooted in its representative nature,” he reminded.

Director-General of UNESCO, Audrey Azoulay, praised members of the High-Level Steering Committee for their efforts during what she called the “big year of mobilising education globally,” and singled out Sierra Leone’s President Julius Maada Bio for his “relentless effort to the cause of education”.

She noted that the committee had demonstrated a new commitment to education throughout the world, as education was now the basis of the global new contract. She encouraged members at the meeting to make the necessary educational commitments, stating, “All our efforts will be futile unless proactive and positively translated”.

The UNESCO boss also reiterated their continued coordination, provision of support on environmental education reform, and training of teachers in line with attaining Sustainable Development Goal 4. She added that education policy, more funding for education and the monitoring of progress indicators would be part of the goal of transforming education.